Where You Can Find Henriquez:

Me:  How would you describe your style of comedy?

Henriquez: My comedy ranges from potty humor/blue comedy to observational and satire. I don’t try to fall into one shtick, but I tend to. And in the last few years I got this charming asshole thing going. Not like Vince Vaughn in Wedding Crashers or Stiffler from the American Pie movies, but the guy that can easily be endearing, creepy, or just a straight up piece of shit depending on what day you catch him. Every comedian has that one thing they’re known for, whether it’s Will Farrell’s bumbling tenacity or Eddie Murphy emulating an older woman or Chris Farley’s lovable loser.

Me: How long have you been involved in stand up comedy?

Henriquez:  I only just recently got into stand up and even now I don’t really do that many open mics. By “not that many” I mean I’ve only done 2 in the last 6 months since I got into standup. I’m more of an improv comedian and sketch comedian (think SNL, Key and Peele, Mad TV, In Living Color, etc.) I’ve been doing long-form improv for about 4 years and sketch for 6 or 7. Long-form isn’t like “Who’s Line is it anyway?” There’s many different styles to long-form where you take one suggestion (word, quote, lyric, movie title, etc.) and create anywhere between 15- to 30- minute shows simply from whatever that suggestion inspired.

Me: Who are some comedians you admire and why?

Henriquez: Eddie Murphy (80’s Eddie not family-friendly-movies Eddie) was the reason I wanted to do comedy. Because of him, I wanted to say outlandish shit in front of people and get praised by laughter rather than spanked and grounded (I used to sneak downstairs late at night to watch Delirious and Raw on HBO). Chris Farley because I love physical comedy. There’s not a lot of slapstick comedy these days, so him plus The 3 Stooges really inspire me to sacrifice my body for laughs at any cost. Jim Carey would also be in that vane of physical comedians. John Leguizamo because he has such a diverse character and energy range that you never tire watching him. And then Larry David because his comedy lets me know that you can be a complete dick and still be funny.

Me: Is there anything annoying that people tend to say or do when they first discover you’re a comedian?

Henriquez: I wouldn’t say it’s annoying, but as soon as people learn that I’m a comedian they want to hear a joke or a “bit” from my “set”. Instantly when you say you’re a comedian everyone thinks you mean stand-up or a comic. But then I kindly educate them that I’m a sketch and improv comedian and writer. However, I always oblige with the only joke I can remember: “What did the daddy buffalo say to the boy buffalo when it was leaving for school? Bison (bye, son).” See? I’m lame when it comes to stand-up.

Me: Which area or type of comedy work do you find the most challenging?

Henriquez: Stand-up. After getting into and hanging around comics this past summer, I really gained much more respect for their craft, their art of comedy. See, in sketch and improv, you’re usually with 2, 3, 4, 8 other people and if you’re wit is not hitting, you have your team to help catch you or pick up the slack, or you all fail together. And there’s something about sucking as a group that’s easier than sucking by yourself. Still, you have that safety in numbers mentality going in. As a standup, it’s just you. If your jokes flop, it’s all eyes on you. No one to move on to the next joke, no moving on to the next beat, no editing into a new scene, just you, a bad joke, and some drunk guy in the back telling you that you suck.

Me: Is there a particular issue that you think the comedic community isn’t addressing properly or highlighting enough? If so, what?

Henriquez: I think the comedy community does a great job of handling in the most sensitive of issues. I mean, I just saw an Amy Schumer sketch where it was about a HS football team having to give up rape?!?! That’s insane! I’ve seen a comic in my area take on abortion and the N word topic (he’s white) and he did so with taste, if you can believe it. When you see specials on HBO or Comedy central, most comics are addressing current issues, doing a great job at showing us how silly we are for making these issues, and then making everyone laugh at the issue and at ourselves. If anything, we as comedians need to to highlight more of this sensitive society we’re now living in, where everyone is taking offense to something or the other or looking for some platform to stand on. It’s pathetic, really. I feel if you or your family are not in any physical harm, don’t take offense!

Me: How do you usually prepare for a show?

Henriquez: Beer. If it’s improv, and not because I get nervous (at least not anymore) but moreso to linger amongst the audience and look at the stage the way they’re looking at it; not knowing what to expect, not knowing what’s going to happen, what jokes are going to be said. I mean, after all, in improv there’s no script. And if it’s a sketch show, I go over my lines a few times right before the show with castmates and then I make sure I have my costumes rady for the quick changes we have to do and my props ready and all that theatrical jazz. The few times I’ve done standup, beer, again. And also just listening to the comics ahead of me and seeing how the comic reacts to the audience rather than the audience reacting to the comic’s jokes.

Me: What draws you to the art of comedy?

Henriquez: Life is serious as hell. Way too serious. And I don’t want to live a life where I need to be serious all the time and take offense by everything. Taxes are serious, laws are serious, having a family is sometimes serious, a real job, driving on the road, dying… all serious. Every day is serious enough on its own that having comedy to use as a creative outlet to say “Hey, that thing that happened to me today sucked! But it could have sucked more had XYZ also happened to me.” and have people understand you and laugh with you, just forgetting all that seriousness even for just a moment, and just exhaling daily bullshit is really, really freeing.

Me:  How do you handle hecklers?

Henriquez: Luckily I haven’t experienced hecklers or at least nothing too bad. Once I was in an improv scene and this group of 3 or 4 people were wasted and commentating every single thing I was pantomiming and just being obnoxiously loud. Fortunately my scene partner and I had painted ourselves to be having a discussion in our home, in our living room that at the point of that little groups most obnoxious, I smoothly paused my partner in whatever she was saying and said, “Hold on, honey. Let me turn down the TV so I can hear you.” and pointed an imaginary prop remote controller at those 4 people and acted as if I was turning down the volume on the TV in the living room in the house I had painted myself into. Not only did the rest of the audience applaud in agreement, they laughed that I had called out the pink elephant and made it part of my improv scene. The “hecklers” got the hint, laughed along too, and the rest of the show they were pretty respectful.

Me: What’s your advice to young comedians?

Henriquez: Get as much stage time as you can. If it’s standup, go to open mics and watch other comics. Write and rewrite your material and then get up there and do it. Make friends with like-minded artists (comedians). If it’s sketch or improv, take classes and workshops. And attend shows to watch other improvisors and sketch comedians. But don’t get so engulfed in the community that all you’re doing is going to shows and hanging out with comedians 24/7. You also have to have a life, go on dates, see movies, walk around the city, the mall, get your oil changed, go to the DMV, whatever, and live life. After all, that’s where your material and ideas are going to come from. 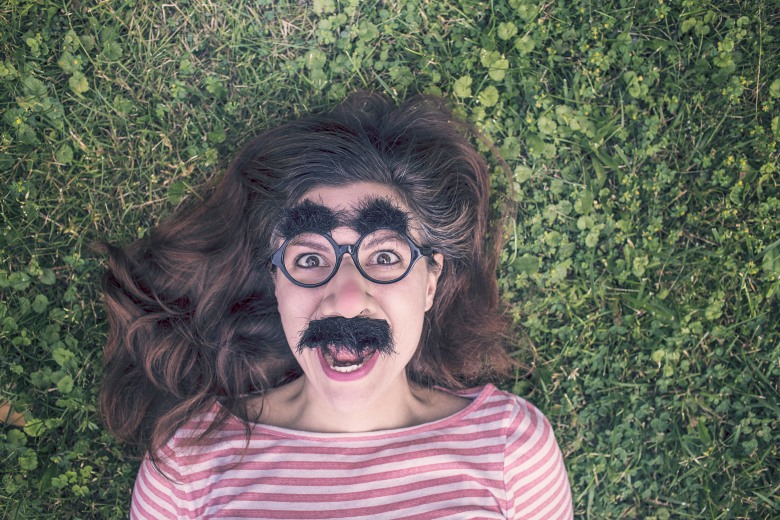 Me:  If you could switch bodies with another comedian for a day, who would it be, and why?

Henriquez: Good question. I really don’t know. But the first name that comes to mind is Jimmy Fallon for some reason. He’s riding a good high right now and has an awesome band on his show and tons of famous and funny friends. F— it! Let’s go with Fallon.

Me: Which superpower would you choose, and why?

Henriquez: Clairvoyance. I’d love to know who I should avoid talking to. I mean, I try to avoid talking to mostly everyone now but if I can do it because I know they’re going to ask me to help them move or because they’re just having a bad day, I bet I could come off as less of an asshole.

Me:  If you ruled the world, what would your first order of business be?

Henriquez: I’d grant everyone one wish. All 7 billion of them. Every dog deserves a bone thrown their way at least once, right? Everyone should experience happiness, or what they’re idea of happiness is, just one time to see if what they wanted really is what they thought they needed. Or for those pure souls, they get their chance to really make a difference in the world.

Me:  If there was a book written about your life, what would the title be?

Henriquez: Raf Out Loud. I was introverted for a long time and writing and comedy really got me out of my shell and all this inappropriate humor I had pent up eventually spewed out, so I think that title fits.

Me: If you could only eat one type of food for the rest of the life, what would it be?

Henriquez: Beer. Assuming that one type of food would still meet all my nutritional and dietary needs? Yeah, beer. Vegans and meat-eaters alike can at least agree on beer.

Post may be re-shared for non-commercial purposes with credit to Ditrie Marie Bowie. If shared digitally, a link back to this blog is preferred.

Are you on Litsy? Add DitrieMarieBowie