I married into an extensive library of books I’d never encountered before. Because of that, I embarked upon a journey to read every single one.

Most of the collection consists of action, adventure, and sci-fi, all genres which I thoroughly enjoy but are heavily marketed toward men. None of the books are more recent than the early aughts, thanks to ebooks and a lack of physical space.

This is a project that will take me years to complete, but it has been incredibly rewarding. (I blush to mention that I’d never read Douglas Adams or Terry Pratchett before beginning this endeavor.) This process has introduced me to some of my favorite characters, but it has not been without its struggles. Some books are simply not written for me, but I’ve stubbornly clawed my way through them. These books take me at least four times as long to finish, but finish them, I do. My current read, Nocturne for a Dangerous Man by Marc Matz, is one such battle. 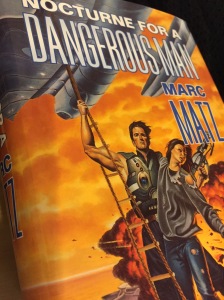 Harkening back to my teaching days, I’m beginning with the positive aspects of this book.

Published in 1999, it doesn’t feel dated due to the intrusion of what, at the time the book was written, would have been considered modern technology. CD-ROMs are mentioned here and there, but it isn’t a major detractor from this novel as I’ve noticed in other 90s sci-fi.

The book is incredibly detailed and features a wide array of languages and bits of information. This is not a style of writing I enjoy, per se, but it does involve a level of skill which I highly admire.

There are also what I like to call quotable moments in the book, one of which I had the foresight to capture via Litsy.

That line was spoken by a powerful and dynamic female character that, so far, I’ve only met once. I’m nearly finished with the book.

Now for the less positive notes. There are three subjects in this novel which are not handled as well as I would like.

Though now retired from music, I am a classically trained pianist and composer. Most of my teens and all of my early adulthood was spent teaching music, both privately and in a public school setting. In the past, I’ve taught courses ranging from music theory to music history to composition and performance courses. My younger brother is a composer currently nearing the end of his doctoral program.

When I saw the word “Nocturne” in the title of this book, I was immediately drawn to it. For those who don’t know, a nocturne is a character piece that usually follows a ternary, or three part, structure. Nocturnes musically depict nighttime, hence the name. Though popularized by Chopin, they were invented by the Irish composer, John Field.

Now if there is something I have learned over the past several years, it’s that the more deeply a person understands a subject, the more difficult it is to enjoy it. The music pleasure can provide me is fuller than anything I ever experienced before I was music literate, but it is increasingly harder to find. It’s also much easier to find irritating misinformation about your area of expertise floating in the flotsam of modern culture.

There were several musical references in this book that made me cringe, though I believe this says more about me and my openness to irritation than it does about the author. From his writing, I get the sense that he was an advanced cellist and an intermediate pianist at the time he wrote the book. It seemed like his musical depictions were drawn from personal experience. However, there were times where he blithely interchanged musical terms (rondo instead of counterpoint) or made general claims like the one below where I had to shut the book and take some slow, deep breaths.

I am critical of these moments in books because it is my biggest fear as a writer. Here is an author who, I’m presuming, drew on personal experience and probably no small amount of research. And he still wrote things that didn’t feel natural or right. It’s a huge pitfall, and I’m not entirely sure how to avoid or make peace with it.

This book does not pass the Bechdel test; the entire plot is a damsel-in-distress trope. Lesbians in this book appear through a heavily filtered male gaze. There are no gay men in this book. Female characters either:

I suppose it’s all that could be expected of a writer whose bio’s opening line is:

Marc Matz lives in California with his lady, Maritha, and until recently was in charge of a beauty-products company.

It makes me wonder how many women and nonbinary writers with English degrees had books turned down that year to make room for this one. I’m hoping there’s a twist at the end of the novel that will redeem my opinion of it.

This one really irks me. He throws in random words and phrases from a multitude of languages: Swedish, French, Italian, Portuguese, Russian, Mandarin, and Spanish. I can’t speak for most of those languages, but the way he uses Spanish is ridiculous. Sometimes the word order is totally wrong, other times he pops in one word in the middle of the sentence for no reason other than to make his writing feel exotic.

It doesn’t. It feels exploitative.

And the frequency with which he sprinkles Spanish words throughout the book doesn’t make sense within the story’s own world. The main character describes Spanish as the least spoken language on the planet. So why does he butcher it so much?

The most recent line that made me shut the book and take a breather was this one:

We strolled Latin style the short distance to where I had parked the Lotus: the ladies about a half a dozen feet in front, the gentlemen behind.

I am both Hispanic and Latinx. Though my culture isn’t traditionally the most progressive concerning gender dynamics (my grandmother wasn’t allowed to learn the guitar because it was a boy’s instrument– then again, this was 1940), I have never walked like this. Ever. No one in my entire family has ever walked like this, either.

Maybe the author came across a particular ethnicity or culture within the Latinx community that does this. Great. Fantastic. He should have named the style after that group, not the entirety of Latinx culture.

If you’re not quite sure about the difference between Hispanics and Latinx or you’ve never heard of Latinx before, I highly recommend watching this:

Are you on Litsy? Add DitrieMarieBowie

Post may be re-shared for non-commercial purposes with credit to Ditrie Marie Bowie. If shared digitally, a link back to this blog is preferred.