A man on a boat, a world without stars, gyrocopters, and a secret war. 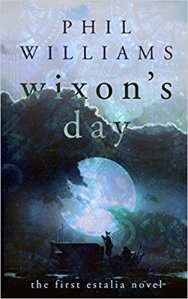 Wixon’s Day, by Phil Williams, is a slow-burning novel set in a dystopian steampunk world.

Set mainly in the country of Estalia, the book takes place several hundred years after a mysterious incident which destroyed most of the world and created a perpetual dark cloud that blots out the sun and stars. Growing food is difficult in these circumstances, and the residents of Estalia do what they can to survive.

Marquos, the protagonist, makes his living by scavenging up and down the river for spare parts to sell. A restless spirit, by nature, his presence is almost haunting at times.

Marquos drifts through the dystopian empire without meaning, searching for hope of a better future as he scavenges to survive.

In the Deadland of the North, they say the sky is clear, and the stars shine: Marquos dreams of seeing it, believing that there is something more to this world.

But when he discovers the Guards meant to protect the country have kidnapped and enslaved innocent children to work in the mines, he makes a choice that changes the course of his life forever. On the run from the law, he is determined to right his past wrongs and stumbles into the midst of a war.

Wixon’s Day is written in third person and the present tense, which makes the actions scenes particularly impactful. The story unwinds slowly, mimicking Marquos’ own journey floating along the water. If you’re searching for a philosophical read sprinkled with powerful fight sequences, this is the book for you.

As Marquos is faced with greater dangers, more of his moral fiber is revealed. Gradually, he shifts from an ambivalent observer of humanity to an active participant in struggles far greater than his own.

His journey is not just into the inhospitable North, but into the darkest truths of his people and their history, unravelling secrets as foggy as the world around him.

Content Warning Note: If you think you might be triggered by any of the following, this may not be the book for you. Contains allusion to cannibalism, (non-detailed/non-graphic) scenes of sexual assault, child abuse, kidnapping, graphic murder scenes, ableist language (mental illness).

Did You Catch These Book Reviews? 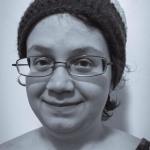 Ditrie Marie Bowie (née Sanchez) is a Puerto Rican in British Columbia, Canada who writes fiction. She is a member of the Alliance of Independent Authors (ALLi) and co-editor of Strange Stories to Tell in the Park. Bowie is also the creator of the webcomic, This Writer Can’t Draw. A classically trained pianist and former educator, she has lived in three different countries spanning two continents. And she met her spouse in a video game.

Got what it takes to top the leader boards?

I’m counting on you.